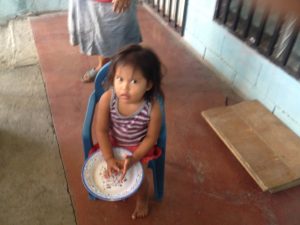 Wouldn’t it make life more simple and less messy if we were more likely to be drawn to people whose personalities were more like our own, rather than those who are more likely to be our polar opposite? Still, opposites attract. Here’s a perfect example, Jesus. Jesus is perfect, we are not. He is attracted to us, He attracts us to Him. Jesus, through the Bible teaches truth. The world teaches the opposite.

Everything about following Jesus is opposite to our fleshly desires what the world teaches.
Jesus has taught us to:

I long to be like that..following the teachings of Jesus… to diminish and become invisible where the only result of what we are doing is to see people love and glorify God….

In other words, when the world (the flesh) gives you advice, smile, nod your head, and do the exact opposite.

here is Winnie feeding the kids, boring, i know, but it is the exact opposite of what we would be doing if we weren’t followers of Jesus.
Dean Peters